After a 21-year gap between albums and a full 19-year break as a band, Sleeper seem at last to be back in earnest. With the imminent release of their latest full-length album 'The Modern Age' and a string of successful live dates behind them over the last couple of years, Sleeper are once again making an impact. The band's first live gig of the year brought them to the intimate surroundings of The Forum in Royal Tunbridge Wells. As part of Independent Venue Week, it was an absolute privilege and pleasure to be able to see the much revered and fondly loved band Sleeper play a venue whose capacity is ten times smaller than that of other venues on their new tour. For a band who've had three top 10 albums and eight top 40 singles, The Forum must have brought back memories of playing in the earlier groups some of the members formed in Manchester before Sleeper became Sleeper.

Ahead of the main event we were treated to a varied and adroit set from self-confessed Sleeper fan She Makes War, "or Laura if you prefer". The solo set started with 'Undone' from her 2018 album 'Brace For Impact', continued on with a tales of an old flame and wannabe cheating husband (not hers) on 'Hold On', and changed tack with Kidd swapping out her guitar for a ukulele on 'Paper Thin'. Through loops and effects Laura kept her set alive and engaging, even joking that she'd played here before, "but you didn't recognise me thankfully; I was in a s**t band". Somewhat contradictory to her stage name, She Makes War seemed to make a few friends along the way, even offering them five free songs for joining her mailing list before closing out her performance with the first track from the last album, 'Devastate Me'.

In the packed, sold-out confines of the former public toilet and brass rubbing centre, Sleeper took to the stage with a huge cheer amid palpable excitement from the giddy crowd. Louise Wener dressed in a black t-shirt that read 'Super Her', silver boots with a matching silver belt and co-ordinating silver nail varnish and black jeans looked as pleased as some of the crowd as she walked out with a huge grin. Sleeper started and finished their 15-song set with two tracks taken from the 'It Girl' album. Their opener, 'Nice Guy Eddie', saw them swiftly take a hold of all those gathered before them as the keys played out, the drums struck up the beat and Wener sang her first, instantly recognisable notes. After a frenzied 'Pyrotechnician' and a wonderfully spirited 'Delicious' from their debut album 'Smart', Sleeper increased the intensity with a pumped up 'What Do I Do Now' and electrified 'Lie Detector'.

There was crowd participation aplenty as Wener repeatedly turned the mic to the audience, inviting them to sing back to her and the band. Louise danced and jigged her way through the lively set, smiling continuously to the crowd and the band. After a brilliant performance of 'Statuesque', and a quick swig of very frothy beer for Lou, Sleeper played the first song of the night from their forthcoming album of the same name, 'The Modern World'. It was the slowest tempo track of the night but stood up well against the classics from their back catalogue. Sleeper immediately switched things up with a fiery and impassioned performance of one of their earliest tracks, 'Alice In Vain'. The trashing guitars, machine gun percussion and Wener's heightened intensity made sure the song went down a storm.

Towards the end of the main set Wener and her band once again lit up the stage with a great take on 'Atomic' that also included a slice of Joy Division's 'Love Will Tear Us Apart' to the delight of the crowd. Closing out pre-encore we were once again transported back to the summer of '94 courtesy of the band's infectious breakthrough hit, 'Inbetweener'. A three-track encore started with last year's very well received single 'Look At You Now' and concluded with an extended (7mins +) and very impressive fan favourite 'Sale Of The Century'.

The Forum in Tunbridge Wells were very lucky indeed to have Britpop royalty pay a visit and play such a great gig. Those lucky enough to get a ticket saw a big band in a very small venue deliver a hugely enjoyable performance. 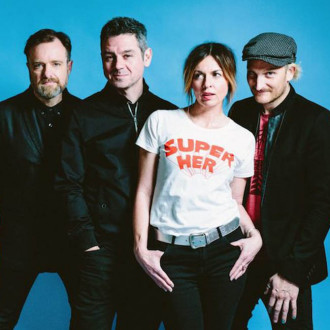