This has never been about exclusion. Slipknot have always been such a divisive entity because people fear the unknown, and people fear power. Slipknot's meteoric rise to being the biggest heavy metal band of this generation has not come from watering down their anvil-heavy music to appeal to a wider market, it has been driven by a growing fan base of fierce loyalty. Slipknot's 'maggots' are a singular breed. Selling out the Nottingham's Capital FM Arena in minutes, those branded 'outsiders' have suddenly found themselves in their millions across the world, and part of a family. This has never been about exclusion. 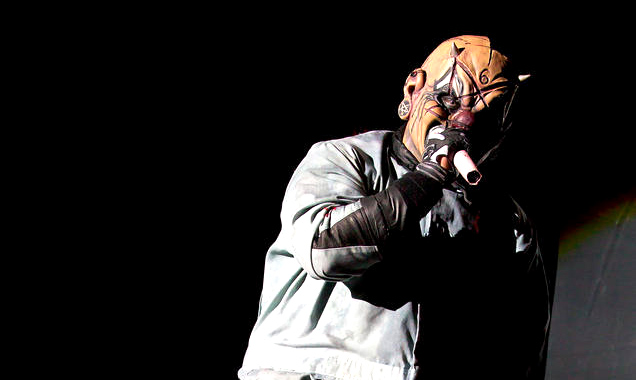 After three years of much documented discord, from the passing of bassist Paul Gray to the acrimonious departure of drummer Joey Jordison, Slipknot have never needed such loyal support more. And what a reward this was. A staggering three-tiered stage bedecked in lights and topped with a huge goat's head provided a visual spectacle backed with retina-searing pyrotechnics; there has never been a more fitting accompaniment to 90 minutes filled with the primest of prime cuts from their enviable back catalogue.

Sarcastrophe and The Heretic Anthem provided an earth-shattering one-two punch to kick off proceedings, the nine masked members tearing through the songs with an inherent energy and violence. While championing material from latest release .5: The Gray Chapter, it's an effortless showcase dipping into every corner of their 15-year history. Opium Of The People provides a welcome curveball, while the likes of Dead Memories, Before I Forget and Duality are simply stunning to behold. These songs have been the soundtrack for the misunderstood youth, and to hear them in an arena surrounding added real, tangible weight.

It's not all flames, vitriol and ear-shattering volume. Taylor is renowned for his affable nature, and an unerring ability to treat every member of the sold-out arena as a long-lost friend. Affectionately labelling the city "Slipknottingham", every word and movement teased more from the throng of maggots.

At the main set's climax with the fabled Spit It Out, the floor customarily exploded, with Shaun 'Clown' Crahan dictating proceedings from high in the seated area. On his way back to the stage, security quickly ushered him down only for the masked percussionist to detour and pose for photographs with fans on the disabled gantry. This has never been about exclusion.

There's more though. Custer followed, easily standing shoulder-to-shoulder with the finest from their self-titled debut. Once Surfacing crowned a three-song encore to feverish delight, the kings of modern heavy metal had cemented their reign.