Corgan made the comments during an appearance on Alex Jones’ radio show.

Billy Corgan, frontman for The Smashing Pumpkins has compared what he calls ‘social justice warriors’ to the Ku Klux Klan, in an interview with radio host and conspiracy theorist Alex Jones. During the interview Corgan lashed out at the ‘hashtag generation,’ saying they were a threat to freedom of speech. When asked how he thought ‘social justice warriors’ could be stopped Corgan said: "Well, there's two schools of thought: One is, they're gone. They're Maoists. They have the Little Red Book in their hand. You're not gonna get them back.”

A week in music videos... We finally get the first glimpse of what's in store for Kings Of Leon's sixth album 'Mechanical Bull' with their new single 'Supersoaker'. It's probably one of the most highly-anticipated albums of the year following their 2010 offering 'Come Around Sundown' which reached the top spot on the UK album charts and number 2 in the US. If you're a fan of awesome, driving rock anthems, then after listening to 'Supersoaker' you'll be the first to grab a copy of the new album in September. Listen to Supersoaker here.

Just as fresh and anthemic is London band Bastille, who stole the hearts of the nation with their debut album 'Bad Blood' earlier this year - an easy chart topper responsible for such tracks as 'Pompeii' and 'Laura Palmer'. They have now released a moving video for their emotional track 'Things We Lose In The Fire' which also managed to chart despite not being released as a single. Bastille are currently on a major world tour and will appear at the likes of Japan's Summer Sonic Festival, Leeds and Reading Festival and Berlin Festival this summer. Watch the video for Things We Lost In The Fire here.

Billy Corgan was always the antagonist of the mainstream 'grunge' scene. None of the other players really seemed to like him very much or at best - like Courtney Love - developed a troubled love/hate relationship with him. Of his contemporaries, still recording and releasing music at the same level as they did back in their heyday, few have managed to maintain the same momentum, the same ethos or the same sound that they once had (Sonic Youth, you're off the hook). 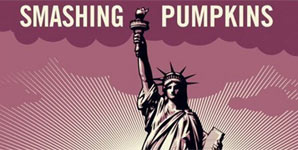 In the year of the comebacks, it was the Pumpkins one which got any self-respecting alternative rocker really excited. It's different to most of the others, like The Police, and The Eagles (CASH COWS!) or Spinal Tap (A JOKE BAND!) or the Spice Girls (BOTH!) because rather than just a lengthy world tour where they would have their devotees over a barrel, paying through their collective nose for overpriced tickets and merchandise, there would be an album of new material as well, and here it is, Zeitgeist.

Well, it would be a bit of a stretch to call this a Smashing Pumpkins record really, as only Corgan and Chamberlain remain from the classic line-up, it could just as easily be called a Billy Corgan solo album. That said, the wailing, heavy metal guitars and OTT production means this sounds quintessentially Pumpkins, Jimmy Chamberlain's drums also sound mightily impressive. The trouble is, while this may have that Smashing Pumpkins 'sound', it lacks any of the classic songwriting or sheer inventiveness of their peak, attributes that were abundant on Mellon Collie.

Songs start off with great ides or riffs, 'Bleeding the Orchid' being an example, but they are stretched on until they become interminable. Similarly, 'United States' tries to be ominous and atmospheric, but ultimately falls flat under the weight of its own pretentiousness.

It's not all doom and gloom though, 'Tarantula', wisely chosen as the lead-off single, is a triumphant glam stomper, worthy of a place in the Corgan canon. Also, 'That's the Way (My Love Is)' is a welcome relief from the oppressive murkiness that hangs over the album, and sounds more like Corgan and Chamberlains now defunct, Pumpkins-on-Prozac band, Zwan. In this case that is no bad thing.

When the Smashing Pumpkins grace the stage at this year's Carling Weekend,
you can bet your bottom dollar the crowd won't be screaming for tracks from
Zeitgeist.

Billy Corgan: 'I Almost Killed Myself Three Or Four Times'

Splendour In The Grass Festival Marred By Drug Finds 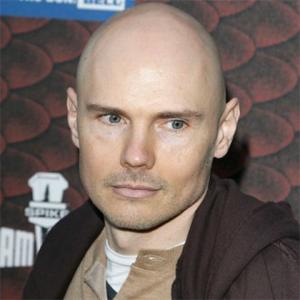