Editors singer Tom Smith and former Razorlight drummer Andy Burrows released their Christmas album, Funny Looking Angels, on November 28th 2011, through B-Unique / PIAS, under the name Smith & Burrows. The album will feature guest vocals from singers such as Danish singer/songwriter Agnes Obel, as well as original covers of Yazoo's Only You and The Longpigs' On and On.

The lead track 'Funny Little Angels', is a track by Birmingham based band Delta.

Tom Smith is well known as the lead singer, rhythm guitarist and keyboardist for Birmingham based band Editors. Their hit singles include Smoking Outside The Hospital Doors, Munich and Blood. All three of their albums have debuted inside the Top Three in the UK album charts and their debut album, The Back Room, was nominated for the 2006 Mercury Prize.

Andy Burrows rose to fame as drummer for successful indie band Razorlight, whose hits include America, In The Morning and Before I Fall To Pieces. Andy left the band in 2009 and formed his own, I Am Arrows, as well as joining the American band We Are Scientists. 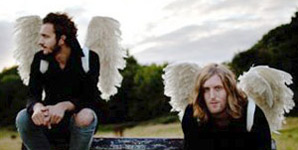