Review of Dye It Blonde Album by Smith Westerns

When Chicago trio Smith Westerns first reared their heads in the summer of 2009 courtesy of their self-titled debut long player, it left little to the imagination as to where they were coming from. Sounding like it had been recorded in a disused garage in little over twenty-four hours while containing song titles like 'The Glam Goddess' and 'Diamond Boys', they seemed to have more in common with the likes of Marc Bolan and David Bowie than fellow kindred spirits in lo-fi Wavves or No Age even if the end results did sound uncannily like Brummy eighties indie four-piece Birdland. 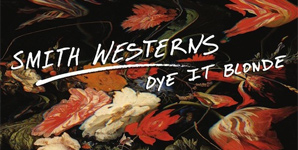 However, strip away the low budget production and cursory bum notes and it was obvious when listening to songs like 'Dreams' and 'My Heart' that Smith Westerns were a band bursting with potential. With the songwriting duties split three ways between siblings and dual vocalists Cullen (guitars) and Connor (bass) Omori and guitarist Max Kakacek, all it required was for someone with the studio nous to be able to bring the best out of the band's compositions in a recording environment.

Enter New York-base technical boffin Chris Coady, whose past credits can boast the likes of 'Fever To Tell', 'Dear Science' and 'Teen Dream' amongst a highly impressive roster. With 'Dye It Blonde', he's helped transform the band's organically raw compositions into ten pieces that sound like the missing link between Ziggy Stardust and Oracular Spectacular.

While there are still parts of 'Dye It Blonde' that hark back to an era where Mick Ronson and David Bowie androgynously cavorted on BBC television and the Bay City Rollers tartan trousers were all the rage, there's a delicacy about much of its contents not too dissimilar to Teenage Fanclub's more heartfelt moments or a slightly insular Band Of Horses. Take opener 'Weekend' for example, Cullen Omori's vocal echoing Joey Ramone for sentimentality as he spits out the line "Tears are never ending" wistfully. Partly T-Rex covering Norman Blake and co.'s 'The Concept', others Nathan Williams after a seventies themed slumber party, it sets the mood for 'Dye It Blonde' succinctly, and at no point do any of the nine songs that follow disappoint in any way.

'Still New' rides a similar crest of a wave to what Britpop also-rans Whiteout were trying to achieve almost twenty years ago, except with an added dose of plausibility about it, while the upbeat 'All Die Young', complete with cooing harmonies and bristling melodies sounds like Suede had they taken 'All The Young Dudes' as creative their template from the outset. The past and future collide spectacularly on the gorgeously crafted 'Smile', Omori declaring, "It's a waste of time for the sun, it shines and it shines for you." over a psychedelic backdrop that would have improved the second MGMT record tenfold. 'Dance Away' meanwhile outdoes The Strokes at taking new wave punk to the disco, evoking memories of 'Manifesto' era Roxy Music in the process.

Add the delectable 'End Of The Night' ("Everybody wants to be a star on Saturday night") and incisive finale that is the title track and you've a record here that not only realises the potential demonstrated on 'The Smith Westerns' two years ago, but substantially elevates its creators to a prominent position that should result in 'Dye It Blonde' featuring heavily in many an end of year 'Best Of.' come December.