By Andrew Lockwood in Music Reviews on 30 January 2020

By Andrew Lockwood in Music Reviews on 19 June 2012

Smoke Fairies new album 'Blood Speaks' is the result of a 'more confident', 'bolder' band 'pushing (their) boundaries' and incorporating 'broader influences'. Having caught the ear of such respected and influential musicians as Richard Hawley and Jack White (the latter having recorded, released and gigged with the duo), Katherine Blamire and Jessica Davies may have found themselves in a position of implied pressure to follow up their very favourably received debut album, 'Through Low Light And Trees'. Upping sticks from the tranquillity and peace of Sussex and eschewing their previous Cornwall haunt in favour of the suburban chaos of London's Ladbrook Grove to record their new album has undoubtedly helped the pair toughen up both musically and individually. In Katherine's own words, she says, 'We've made peace with the city' whereas previously she felt like she was trapped by it. The result is an album, Smoke Fairies, say, which is, in the most part, 'Inspired by London and travelling.' 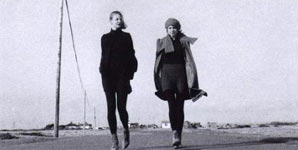