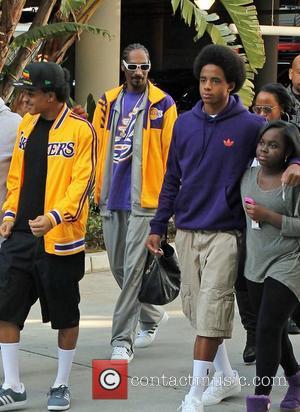 Picture: Snoop Dogg, arriving at the basketball match between Los Angeles Lakers and the Chicago Bulls held at the Staples Center on Christmas Day. Los...

Superstar rapper Snoop Dogg kicked off the celebrity series of game show 'The Price is Right' on Monday (January 2, 2012), winning big with contestant Darlene. Each episode of the week-long series features a notable celebrity lending a helping hand to a regular contestant and Snoop did his best to help Darlene take home some big money.
The show had promised to match the regular contestant's winnings for a charity of the celebrity's choosing. A long-time fan of the show, 40-year-old Snoop was playing for his charity - Snoop Football League, which mentors young people via football team-play. The rapper, who has an estimated fortune of over $25 million, showed off his household goods shopping skills by helping Darlene to big wins in games such as Plinko ($12.500). He had more modest success on the big wheel game, spinning a 20, which resulted in a $2,000 win for Darlene. Rounding out the show with another big win, Snoop and his partner took home a total of $75,585 in prizes.
This week's remaining episodes of Celebrity Price is Right will feature Jenny McCarthy, actor Neil Patrick Harris, Chris Daughtry and the model Heidi Klum. The show began in 1956, hosted by Bill Cullen, before being revamped and fronted by Bob Barker from 1972. Since 2007, the show has been helmed by DREW CAREY.