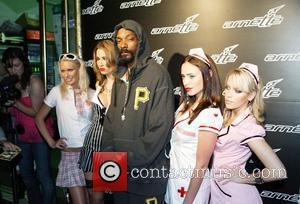 Picture: Snoop Dogg arrives at Neverland Nightclub for the launch of the new range of Arnette sunglasses piror to his Sydney concert with Ice Cube on...

Rapper Snoop Dogg has quit his record label.The Drop It Like It's Hot hitmaker has confirmed he will no longer release albums through Interscope records, which has been his home for almost ten years of his career.
The star launched his first LP Doggystyle in 1993 through the label's subsidiary Death Row Records, and went on to release two more hit records under the Death Row banner.
He moved to Master P's No Limit Records for three albums from 1998 to 2000, dabbled briefly with EMI in 2002, before returning to Insterscope under the Geffen label imprint in 2004.
Snoop released his ninth studio LP Ego Trippin' through the label in 2008, but will no longer work with Interscope on any further projects.
No reason for the sudden move has been announced, and the rapper is refusing to comment on which label he will work with next.
He tells AllHipHop.com, "We are pushing the envelope on getting everything finalised. But I will not be releasing anymore projects under Interscope/Geffen."