Snow Patrol - You're All I Have Single Review

Review of You're All I Have Single by Snow Patrol

Snow Patrol
You're All I Have
Single Review 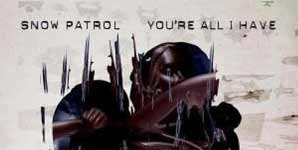 Having spawned four Top 40 singles, Snow Patrol's "Final Straw" album finally saw the band come to prominence after years spent toiling away, with sales figures topping 2 million copies. As well as supporting U2 and playing at Live 8, 2005 saw them begin work on their new record "Eyes Open", from which this single is lifted.

Keen to announce their return, "You're All I Need" sees the 'Patrol in up-tempo mood, more in the style of "Spitting Games" than "Run". They've not made any great strides and it's easily recognisable as the work of Gary Lightbody and co., which means it's a decent indie number that should see them retain the fan base they've already established.