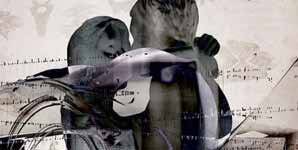 Nearly a decade on from when they released their first EP, "Starfighter Pilot", the band formally known as Polar Bear return to a music scene still riding high on the Coldplay wave. With 2004's "Final Straw", Snow Patrol established themselves as big players in British music, as well as achieving respectable success on the other side of the Atlantic, where they will be touring toward the end of May. They'll then return to the UK later in the summer, joining in with the fun at T On The Fringe, Latitude Festival, and the Eden Project.

Recent Top Ten hit "You're All I Have" introduces the record in solid indie-rock fashion, and the momentum is carried through to "Hands Open", the first single to be taken from the album in North America. With choppy guitars and a big chorus, it shows Snow Patrol at their energetic best. Those who prefer the band's tender moments will adore "Chasing Cars", a natural successor to lighter-waving anthem "Run". Gentle and soothing, it's a love ballad in the best possible sense, with wonder lyrics such as "I don't quite know how to say how I feel, those three words are said too much, they're not enough." The epic ending is predictable, but can't tarnish a beautiful song, which is a label that can also be placed on the soothing and melodic "You Could Be Happy".

After a fantastic start to "Eyes Open" the band lose their way, with "Shut Your Eyes" lacking direction and "It's Beginning To Get To Me" running along unspectacularly, albeit in pleasant tones. Clocking in at over five minutes, the choir-aided "Make This Go On Forever" fails to keep your attention for its duration, and then comes the guest appearance of Martha Wainwright on "Set The Fire To The Third Bar." Her vocals work well with those of Gary Lightbody, but the track itself lacks quality. Fortunately, "Headlights On Dark Roads" doesn't suffer in the same way, being a dynamic number with pulsating bass guitar and sweeping "woohoo" backing vocals. It's the last highlight on a hit-and-miss return from Snow Patrol, who when good can be great, and when bad are dull.