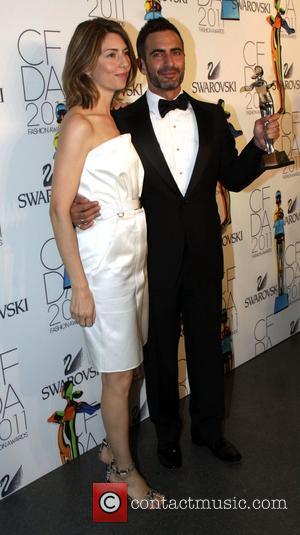 The couple tied the knot in front of 80 people who attended the ceremony at Palazzo Margherita, a historic building owned by the bride's father, who walked her down the aisle. Coppola wore a lavender gown designed by Azzedine Alaia and the ceremony was officiated by Bernalda's mayor Leonardo Chiruzzi. He told the Associated Press, "Everything went well.It was simple, calm, in the garden". Guests at the nuptials, which included Star Wars filmmaker George Lucas, enjoyed a wedding meal of locally sourced figs, salads, pasta, fish and pork. The high profile couple, who first announced their engagement in May 2011, already have two children together, 4-year-old Romy and 15-month-old Cosima. Best known for her OSCAR winning screenplay 'Lost in Translation', which she also directed, Sofia recently became the first woman to scoop the Venice Film Festival's most prestigious award 'The Golden Lion', for her movie 'Somewhere'.

Sofia Coppola's first marriage, to the director Spike Jonze, lasted from 1993 to 2003 and ended in divorce.