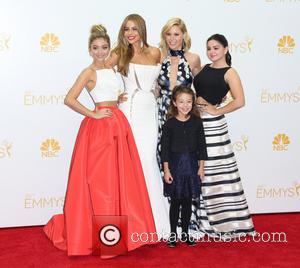 Actress Sofia Vergara and her new beau Joe Manganiello brought their romance South of the Border and spent America's Labor Day weekend (29Aug-01Sep14) together in Mexico.

The Colombian beauty and the Magic Mike hunk have been dating for nearly three months, and decided to get some rest and relaxation with a romantic getaway.

Vergara posted a photo on Twitter.com on Sunday (31Aug14) showing off her and Manganiello's suntanned legs while lounging on the beach. She added the caption, "Heaven #Mexico".

The pair was also photographed enjoying time by the ocean, as Manganiello smoked a cigar and Vergara looked on with a giant smile on her face.

Their holiday in the sun coincided with the launch in the U.S. of the sequel to Manganiello's stripper movie, Magic Mike Xxl.