It's definitely not often that one would find music that's unique in today's fast paced music scene. It's very easy to put it into genres, and it's rare that one finds something that is really difficult to compare to something else. This doesn't make music bad, just very hard for artists to make something truly different. But, Cardiff's psychedelic quartet Soft Hearted Scientists release their studio album Wandermoon on August 8th 2011, and on first listening, it sounds like they might have managed it. 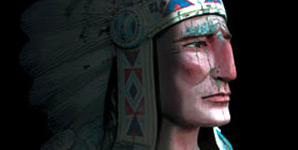 Soft Hearted Scientists don't write songs or play music in any kind of conventional way. Their sound is extremely hard to describe, because they go completely out of their way to make it as strange sounding and unique as possible. It sounds like a peculiar blend of nursery rhymes, 60's style of singing and folk music. Guitars are played in very strange ways, and they describe themselves as having a "fascination with acoustic guitars and old synthesizers that make bizarre noises." There are chimes, the quoted 'old synthesizers', it sounds at some point like circus music.

The first initial reaction that I had to this album is that it was 'creepy'. The sounds like the circus were particularly unnerving. It conjured up some very strange imagery, music that wouldn't sound out of place in a film about nightmares. One could almost expect to see Freddy Krueger in clown make-up walk in the room. Psychedelic isn't a strong enough word to describe it, more like scary. In fact, it wouldn't sound too out of place at Woodstock. Once one is past this initial reaction however, one finds that it's actually quite relaxing, if the Scientists' sound is to their taste. It's a strangely relaxing, melodic and trance-inducing sound. Parts of the album even sound a little bit like The Beatles, it has the capacity to remind a listener of Yellow Submarine. The vocal harmonies, present throughout the album, really remind us of the 60's style of singing.

It's full of problems though, one of them being that the Soft Hearted Scientists sound like they're trying too hard to be different and unique. It gets a bit much if listened to constantly; it can get quite pressing on the eardrums and very intense. It should be listened to either very carefully, or in short bursts. Another problem is that the unique-ness of the music is definitely not to everybody's tastes. It's inaccessible to the mass population of listeners, and restricts their fanbase from expanding. In order to be more successful, it might make sense for Soft Hearted Scientists to concentrate less on being unique. 5/10.