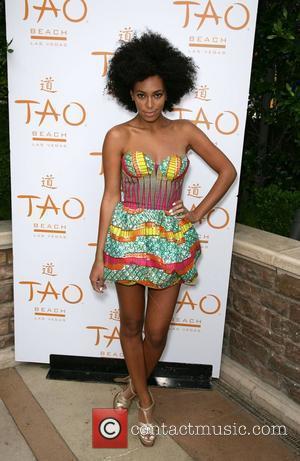 Singer Solange Knowles turns to electro and indie rock music for inspiration when she is in the studio - because she's "so bored" with contemporary R&B.
Beyonce's younger sister admits she grew up hooked on soulful tunes by the likes of SWV and the late Aaliyah, but she has since turned her back on the genre in favour of edgy new sounds by artists like Grizzly Bear, the Dirty Projectors and MGMT.
She says, "I'm so bored with it (R&B). After being an R&B junkie for years, I actually turned to a lot of indie music because I was just so uninterested.
"I grew up loving Missy Elliott, Destiny's Child, SWV, Aaliyah, Carl Thomas, Melody... Nowadays that substance and style are kind of dead with the exception of a few."
And her ear for good music has been recognised by her brother-in-law Jay-Z - the rap superstar recently checked out Grizzly Bear at a show in New York on the advice of Solange.