Son Lux, the ever fluid vehicle for the multi-talented New Yorker Ryan Lott, delivers an intriguing, imaginative and all together inspired fourth album, 'Bones'. Ryan, musician, writer, soundtrack creator and ad scorer, has collaborated with many people since his arrival on the music scene in 2007. Last year saw him team up with Lorde (amongst others) on 'Easy', and he continues to be actively involved on the triumvirate venture with Sufjan Stevens and Serengeti, 'Sisyphus'. With 'Bones', however, Ryan Lott is no longer just collaborating or merely working with an artist and as such his Son Lux name is now that of the band, being joined as he is by guitarist Rafiq Bhatia and drummer Ian Chang. 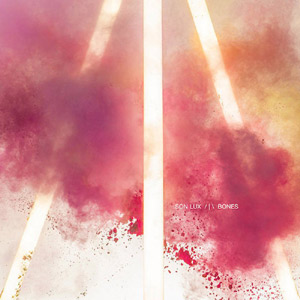 The differences the new additions have made are subtle but, on the whole, positive. 'Bones' is a very cohesive body of work that certainly feels fuller and slightly more approachable than some of Son Lux's previous work. None of it is particularly immediate or commercial, but it is a thoroughly captivating curiosity.

The compositions are never formulaic, they are challenging and brilliantly creative, they don't drift past in the background, they require your utmost attention and your unwavering focus. The music is, at times, jagged and angular, harsh, surprising and arresting ('Change Is Everything') but at others tender, delicate and even soulful ('Flight' and 'I am The Others'). Classical passages and string sections ('Breathe Out') vie for airtime with angelic or terrified vocals whilst the music is punctuated with rhythmic hybrids ('This Time' and 'Undone'), injections of electronica and semi-industrial white noise. If that were not enough, guest vocalists, among them Daughter's Elena Tonra on 'White Lies', provide still further interest.

The themes that resonate throughout perfectly match the music that has been made to channel them. Isolation, meaning, change, regeneration and rebirth and identity are all touched on to varying degrees. Ryan asks a lot of questions: "Are we now what we'll be? Are we fixed or free?". In favour of shedding a collective version of reality for imagination on the album's most accessible alt-pop highlight 'Flight' Ryan takes solace, "Oh what noise we'll make, drowning out our mistakes we can't erase."

Throughout 'Bones' your ears are bent in very different directions. There are elements in there that other contemporary musicians have produced, Perfume Genius, St Vincent, Everything Everything, Hot Chip, Metronomy et al, but none quite so intensely focused in such an uncompromising way as Son Lux on 'Bones'. I don't think that it's deliberately trying to be different or push particular boundaries, just that it has happened naturally during its inception, development and creation.

'Bones' veers between distress and hope in equal measure. "You are the part of me that I cannot want to let go" ('Now I Want') sums up the torment and struggle that Ryan is trying to lay bare. As he attempts to wrestle optimism from near despair, you get the sense that he will never settle, will always be striving and that contentment will not be an easy ask.

To Ryan, maybe 'Change Is Everything' (Possibly the biggest track on the album; watch the genius video if you do nothing else) and just maybe after all his questions and contemplations he will have to reconcile himself to the fact that at times he will just have to "Breathe in, breathe out", as he repeats on the album closer.

Son Lux - Change Is Everything Video