Game Of Thrones Star Sophie Turner Did Not Need Sex Education Classes Because She Learned "Everything" From The Raunchy Tv Show. 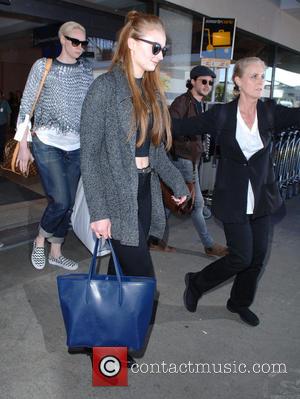 The British actress, who has played Sansa Stark in the fantasy series since she was 14, has revealed her mother tried to talk to her about sex when she turned 16, but the young star was adamant she did not need the discussion.

She tells U.K. magazine Stella, "(When my mum tried to speak to me) I said, 'This isn't necessary, I know everything. I know every single thing that a person can do - and more'. The show is very inventive."

Game of Thrones is renowned for its explicit sex scenes and Turner admits the first time her father visited her on set, she was about to film an attempted gang-rape.

She adds, "It was horribly awkward. My dad just didn't know this scene was going on, he just thought he'd turn up. We were like, 'Oh bad day, Dad'. I think in the beginning (my parents) were (shocked) - there were so many sex scenes in the first series - but after that they got used to it. They knew it was a good quality show. If it hasn't been, I don't think they would have been happy."