Drawn from Southport to Hong Kong with a few destinations along the way, Special Benny are an outfit who base themselves in London. Members Mat Baynton, who went to clown school, and Ben Gates have been making music together since they were 14, but it is only now after various digressions that the band release their debut album. 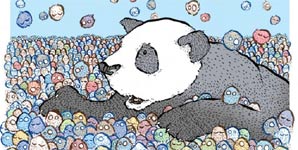 The nine track content of 'Toys' is mainly instrumental, though opener 'Air Filter' contains folk harmonies after a soothing intro section. Musically the band set their stall out here in stating their intent as a progressive act, moving salsa rhythms, dynamic brass before ending with a touch of electronica. It's a perplexing development and unfortunately an indicator of what is to follow, with 'Drums And Phase' being particularly self-indulgent and '"Well done, Josef!"' an unimpressive symphony with an annoying organ riff. The one success of the album comes in the shape of 'Inspector Sands', an enthusiastic rock jam with a hint of funk that builds to a crescendo, but a return to the uninspired returns, culminating in closer 'Toys Come Out To Play'. Starting with a similar sound to Kasabian's 'Fire' the development is unimpressive and very much a characterisation of most of the preceding eight songs, a rather dire collection.