The Spice Girls are reportedly planning a comeback for the closing ceremony of the Olympics after Victoria Beckham gave a radio interview. 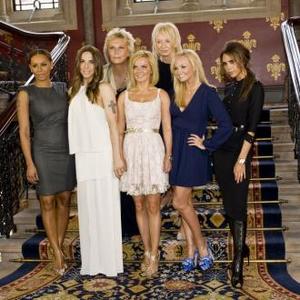 The Spice Girls are reportedly planning a comeback for the closing ceremony of the Olympics.

The group have not sung together since 2008, but could join George Michael, The Who, Take That, Emeli Sande and Jessie J on August 12.

They have provisionally agreed to sing their 1996 track 'Wannabe' as one of two songs .

Geri is expected to wear a Union Flag dress like she did at the 1997 Brit Awards.

Victoria revealed in a radio interview yesterday that she would like to appear with the group next month.

She said: ''I'm so respectful of my past and I love the other girls. We have some fantastic fans. Who knows, maybe some day we'll do something else with the Spice Girls. I would love nothing more.

''I don't know about a comeback tour but I loved being back with the girls. There was a lot of fun, we did so much together and we'll see. If they're up for something then I certainly am.''

Talking on RTE's 'John Murray Show', she added: ''We are so proud to be English and we are very excited about the Olympics.''

A source told the Daily Mirror newspaper: ''The girls were approached for The Games two years ago. It's always been on the cards.

''Victoria is in London until the end of the Games and David's exclusion from the football team means she has time to reunite with the Spice Girls.

''Talks are back in full swing and the balance of power rests with Mel C. Everyone is hopeful she will agree to perform.''