Things Brighten Up For Spider-man Turn Off The Dark 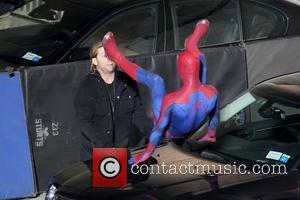 Picture: Spiderman finds himself in an unusual position whilst filming scenes on location for new movie 'Spiderman 4' Los Angeles, USA - 03.02.11

Theater critics may be losing their influence on Broadway the way movie critics have elsewhere. The musical Spider-Man Turn Off the Dark, which might have considered going dark following mostly negative reviews for its "official" opening two weeks ago, has fast become a hot ticket, earning $1.9 million in its first week and $1.7 million in its second, according to numbers released by The Broadway League and reported today (Tuesday) by the Associated Press. The producers reportedly had spent $75 million -- far more than has been invested in any previous Broadway production -- to get it to where it is now. In an interview with the A.P., co-producer Jeremiah J. Harris said that if young audiences continue pouring out to see the show, "we will have accomplished something that has rarely been done on Broadway and will help create an audience for generations to come." A successful outcome is also seen as vital to Sony, which has licensed the movie rights to the Spider-Man character, and Disney, which owns Marvel, which in turn owns the character. The apparent Broadway debacle had seemed to damage the Spider-Man brand, analysts had indicated. It also puts additional pressure on Sony to deliver with its next movie sequel, The Amazing Spider-Man , due to be released in 2013. In an interview with the Washington Times, Box Office magazine editor Phil Contrino commented that if the next film sequel fails, the franchise will be caught in a "perfect storm of failure." Said Contrino "The third 'Spider-Man' film was a financial success, but a lot of fans didn't like it. ... Then on top of that you have the Broadway show. Then they try a movie again and that fails. One-hundred percent of the brand would be tarnished from that."