Just look at the cover for St. Vincent's new self-titled album; it's overblown, turgid and yet incredibly feminine, gracious even, like it could have been used for the next Katy Perry album. With the initial success of 'Marry Me' and with 'Actor' and 'Strange Mercy' doing their bit to help bring Annie Erin Clark to the fore of indie circles, the multi-talented multi-instrumentalist has endeared herself as an artist and her triumphant cover status suggest bold ideas and even bolder ambitions. In actual fact, 'St. Vincent' isn't as intrepid or empowering as the cover may suggest; it is, however, yet another solid album from Clark. 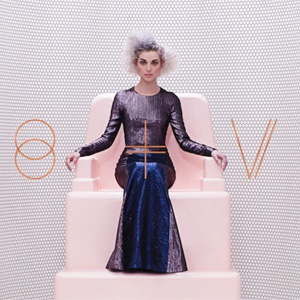 'Rattlesnake' is a great way to open up the album with its post-punk riffs and consistent 'pews' that sound a lot like TIE fighters which, needless to say, is totally awesome. What else is awesome is that the story found within the lyrics of a naked woman fleeing from the threat of an encroaching rattlesnake is a totally true one! The album's content is, once again, a fleeing array of themes and musical styles, from the story-like 'Rattlesnake' to bubbly indie pop and then wide-open emotion; Annie never hems herself into a corner and is always willing to push herself to further demonstrate her musical prowess.

'I Prefer Your Love' is a drifting demonstration of Annie's talent as a toned-down songwriter, as she questions her faith in the face of love. Doing her best Kate Bush impression, 'Prince Johnny' is another example of where Annie is at her vulnerable best, swooning over the atmospheric choral backing before bending her voice for the chorus. It is on these two tracks where Annie seems to be pondering her divinity as she "prays to all" on 'Prince Johnny' and sings, "I prefer your love to Jesus" on 'I Prefer You Love'. Whilst her lyrics still contain references to violence, chaos and enjoy a sense of surrealism, these toned down examples heighten Annie's continued growth as a songwriter.

'Huey Newton' at first seems to be heading in a similar direction as these two, before scuzzy desert riffs, angelic choir and Hadean screeches all come together for a menacing glimpse into Annie's darker side. She goes from playfully open, to desperately vulnerable and then threateningly dangerous before the album is even at the halfway point. With her unconventional instrumentation at its eccentric best and her singing at its most confident, this never seems wrong or even unexpected, as every turn and bend of 'St. Vincent' introduces new elements, ideas, themes and musical choices that never sound out of place.

When we reach 'Psychopath', the multiple layers built upon over the course of the album have reached their highest ebb. The steady "aahs" and building synths transform to become echoing guitars and gentle swooning joined by strings and further swoons, which are then altered into a crunching riff before the returning, jubilant chorus consumes the whole thing once again. It defines everything that St. Vincent stands for; it is a smorgasbord of moods and feeling, from exuberance to tender emotion all in one sitting.

Suddenly, it all makes a whole lot more sense where the album cover is concerned. This isn't futurist femininity on a Lady Gaga or Katy Perry scale, this is just more trademark incongruence. Annie still clearly has a knack of using seemingly disparate sounds and styles, pretty abrasive guitars and gentile vocals for example, and still being able make music that is cohesive and completely natural sounding. As with the album cover and its actual content, there is another disparate edge to St. Vincent, one of self-gratifying grandeur and pomposity compared to the hard-earned intricacies and shifting patterns found within.