The former wrestler has confirmed that she, and new husband Jared Pobre, will become parents for the first time. 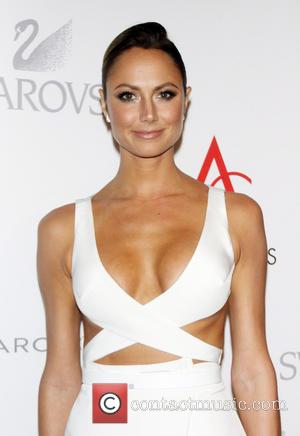 It turns out, for once, the gossip was correct!

On Monday (March 24th), the former WWE diva confirmed these rumors by posting a photo on her Instagram account of an actual bun in an oven.

"Look what we've got cooking!" she captioned the pic. "A Bun'dle of love!"

Confirmation of the newlyweds expecting their first child was also made by the former wrestler's rep to People Magazine.

"More blessings!! We're an elated family-to-be!" the couple announced to the mag.

Keibler and Pobre, who married on March 8th in beach ceremony in Mexico, couldn't be happier to become parents for the first time.

"I'm extremely excited about starting a family and building a future with Stacy," Pobre stated.

The pair previously expressed interest in having children before their wedding, as Stacy previously told the mag, "We're really eager to start a family."

"Both Jared and I didn't think that we were ever going to get married or have kid," she continued. "When you meet the right person, everything changes."

Although George Clooney's former girlfriend's personal life has been full of big announcements as of late, she isn't overwhelmed by any of it, in fact Keibler admitted to finding "peace."

"I'm so excited for the new chapter in my life," the former model said. "I'm so ready for it. I feel for the first time like I'm really fulfilled and at peace."

The happy couple kept their wedding a secret from the close relatives who attended, and only revealed their marital plans while travelling to Mexico on the plane.

"Everyone was screaming and hugging and over the moon," she explained, when they told their relatives about the good news during mid-flight.

"We felt we wanted to put our money, energy and time into our intimate family and [share] this really special bond, special moment and special memory just with them. There's just so much love," Keibler continued.