Star Jones is captured on camera here during the National Day of Service, as part of President Barack Obama’s inaugural weekend. National Day Of Service is a celebration of voluntary work and a means to encourage the American people to give up their time for people who need their assistance. The former host of the View was caught posing for the cameras at the National Mall in Washington DC, ahead of an interview in which she discusses her voluntary work with the American Heart Association.

Jones is wearing an all-red ensemble, to represent the charity. With a red fake fur coat, over a red turtleneck and red trousers, her obsession with the colour is plain for all to see and though she cracks a smile, for the most part, Star Jones maintains a serious expression, throughout the shoot.

Towards the end of last year, Star Jones found herself looking a little less than charitable when she accused Anderson Cooper of coming out as gay, simply to boost his TV ratings. Anderson did not take kindly to the claims and promptly put Star in her place. “As memory serves, in terms of boosting ratings, I seem to recall [Star] hocking her wedding every single day to get free products when she was on 'The View' and I seem to recall her lying about her gastric bypass surgery and making everybody else lie about it as well.” Star Jones and a friend arriving at BOA Steakhouse 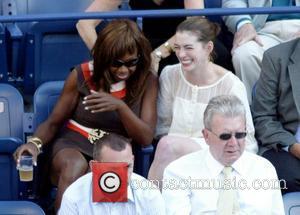