'You Can Fly The Star Ship Enterprise': More Details Revealed About Star Trek: The Game

Game out shortly before JJ Abrams Star Trek Into Darkness 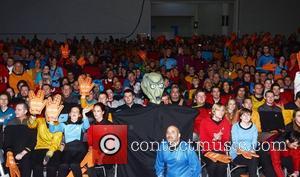 Picture: Star Trek fans made history by breaking the record for the most people dressed in Star Trek costume and will be officially verified by Guinness...

Something else for all you Star Trek fans to get excited about: the new Star Trek game! Brian Miller of Paramount Pictures and the producer of Star Trek: The Video Game spoke to Forbes about the new game and revealed that you would be able to fly the star ship enterprise in the game play.

“We took a nod from the classic Arena episode [of the original Star Trek series] with the Gorn” he explained. “The Gorn attacked an outpost and then started to flee, and Kirk chased them down to try to blow them out of the sky. In our game the Gorn steal a device … and you get to man the Enterprise and actually play as the ship.” Explaining it further, he said “it’s really done in a co-op way. So, if you play as one character you get to shoot the guns, while the other character mans the torpedoes. There is some great narrative we build in to show how vicious our are. It is not just ‘let’s just shoot some ships out of the sky’. They do some things that really change up that game play. You also get to … but you get to manually fly a torpedo from a third-person perspective into a Gorn ship through a massive debris field.”

Sounds pretty exciting to us. The game is being released in May, shortly before director JJ Abrams new Star Trek film Star Trek Into Darkness.