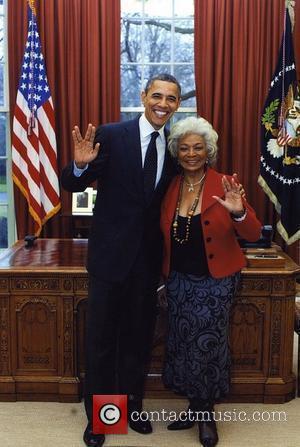 Picture: 'Star Trek' Actor Nichelle Nichols posted this photo of she and President Barack Obama to Twitter.com, with the caption, Taken 2/29/12 in the Oval Office...

Whilst it may be something of a novelty in America, last night saw the first ever Klingon Wedding to take place in the British Isles, as Star Trek fans came from across the Universe to meet up at the London Star Trek Convention and watch as the lovelorn couple said their vows.

Josefin Sockertopp, 23, Sonnie Gustavsson, 29, travelled from their native Sweden to London so that they could come together in one of the more unconventional ways possible, although the two seem to have enjoyed the unique ceremony nonetheless.

Groom Gustavsson said after the ceremony, which is done entirely in the Klingon language developed for the show: "I've been a fan of Star Trek since I was little. The Klingons are strong characters and they bond together. The ceremony was really fun."

Whilst his wife may not have been as enthused about the idea as her husband was, Socoertopp said that it was "a once in a life time thing" and that she is happy to be married regardless of how the ceremony went.

Klingon weddings have taken place at Star Trek Conventions across America for some years, however this convention in the UK, the first one to take place in the country in a decade, marks the first Klingon wedding to take place outside the USA (expect of course for the ones outside Earth).