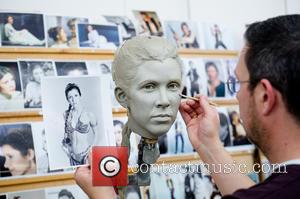 Due to the intense interest in the seventh installment in the saga, Star Wars: Episode VII - The Force Awakens, director J.J. Abrams and bosses at the Disney studio have tightly controlled access to scripts and warned actors to keep plot details under wraps.

However, Daniels, who is reprising his role as C-3PO in the new movie, has branded the security measures "ludicrous" and revealed he received an official warning from studio bosses after giving away a castmember's name on Twitter.com.

He tells British newspaper The Guardian, "The secrecy has been beyond ludicrous. For heaven's sake, it's a movie. When I got the script, it was typed in black on paper of the deepest red so you couldn't photocopy it. I got a hangover just reading it... I said that I'd met so-and-so. An actor who plays a... thing in the film. A character. Immediately I received a message from Disney: 'Remove the tweet! You're not allowed to say that!' Honestly. It's a kind of Kremlin attitude. Look, I know perfectly well not to tell you now what I'm giving you for a Christmas present because it would spoil the surprise. And these films are all about opening the box on Christmas Day... There was none of this paranoia (on the first movie) because it was a daft little film and no one cared."

Star Wars: Episode VII - The Force Awakens is due for release in December (15).