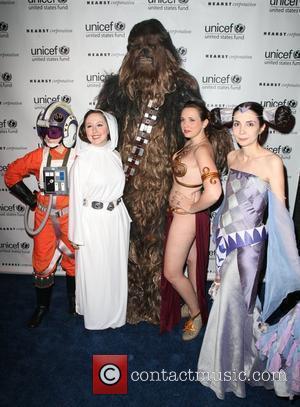 Star Wars cinemagoers in London were stunned this week, when a team of Stormtroopers marched into the screening of Star Wars: Episode I: The Phantom Menace 3D at the Apollo Cinema in Piccadilly Gardens, reports the UK's Daily Mail. The troopers had bought tickets for the movie and happily sat slurping soft-drinks and crunching on pop-corn as the drama unfolded.

General Manager of the cinema Toma Dim said, "'We've had cinemagoers visit us from all over the world, but never before from outer space.It was a complete shock and while I think some of them struggled to get the 3D glasses on over their helmets, they all enjoyed the film". Although essentially a publicity stunt - the appearance of the Stormtroopers does seem a little out of place, given that they don't actually appear in The Phantom Menace. The 3D version of the George Lucas' movie goes on general release tomorrow (February 10, 2012), and fans of the franchise will be able to relive the exploits of Ewan McGregor, Liam Neeson, Natalie Portman and co in 3D. Following its original release in 1999, the movie was praised for its visuals and action-sequences, but lambasted by critics for its writing and acting. Nevertheless, The Phantom Menace grossed $934.3 million worldwide, making it the highest grossing movie in the franchise and the 18th highest grossing film of all time.

It's not the first time that Stormtroopers have treated themselves to an evening out at the cinema - they were led by Darth Vader into the UK premiere of the 'Return of the Sith' at The Empire cinema in London in 2005. George Lucas recently disappointed fans holding out for a new Star Wars movie by announcing his retirement from blockbuster movies. He signalled his desire to move into more arty films.