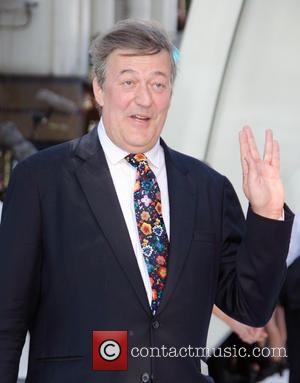 National treasure and known bipolar-sufferer Stephen Fry apparently tried to take his life last year, with the everyman spiralling into a deep, seemingly inescapable depression whilst filming overseas. Downing a cocktail of vodka and pills whilst locked away in his hotel suite, it was only because of a intervention of one of his producers that the QI presenter was found and rescued.

Fry detailed his most recent attempt to take his life - having tried a various points in his life before, most famously during his 1995 breakdown when he fled to Belgium - during an on-stage interview with comic Richard Herring at the Leicester Square Theatre in London. He told the comic; "I am the victim of my own moods, more than most people are perhaps, in as much as I have a condition which requires me to take medication so that I don’t get either too hyper or too depressed to the point of suicide," going on to say, "It was a close run thing. I took a huge number of pills and a huge amount of vodka and the mixture of them made my body convulse so much that I broke four ribs, but I was still unconscious. And, fortunately, the producer I was filming with at the time came into the hotel room and I was found in a sort of unconscious state and taken back to England and looked after.”

The well-exposed television presenter, who has fronted exposés on the mental disorder in the past, also spoke of the anguish he feels during the filming of QI, despite the usually chirpy front he has on when the cameras are rolling. “There are times when I’m doing QI and I’m going, ‘ha ha, yeah, yeah’ and inside I’m going, ‘I want to f****** die. I want to f****** die.’”

The 55-year-old is always honest and open when it comes to his mental disorder and serves as the president of Mind, the charity aimed at raising awareness of mental health. As he explained his role to the audience and Herring, he discussed how he sees his role should work, and that is with frank honesty about his own disorder so that others can feel safe enough to come forward with their own. He went on to explain how the stigma often attached to mental health issues needs to be removed from society, and that even a super-genius like himself cannot explain the sudden mood shifts he and many others feel on a regular basis. He said, “If there were any reasons for it, you could reason someone out of it, and you could tell them why they shouldn’t take their own life."

Fry's discussion with Herring was part of the comedian's weekly podcast series at the theatre, and is available to download from the iTunes Store this week. Stephen is open with his illness We wish him all the best!