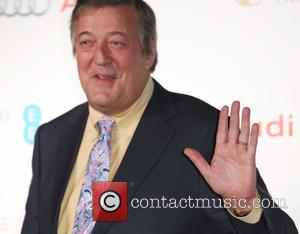 Picture: Stephen Fry - Various stars of film and television were photographed as they arrived for the the EE British Academy of Film and Television Awards...

Stephen Fry registered a fake date for his recent wedding so he would be able to enjoy his big day in private.

The British funnyman tied the knot with his partner Elliot Spencer in the small town of Dereham in Norfolk, England on 17 January (15).

The wedding remained a secret until Fry shared snaps with his online followers, and he has now revealed the registrar in charge of the ceremony logged a false date in the official paperwork to make sure the nuptials remained private.

He tells U.K. Tv host Jonathan Ross, "We chose it (the location) because it's a small market town, they call it 'the Heart of Norfolk'... They (registry office staff) decided that our wedding should be private and the wonderful (registrar)... put a false date into the computer in case it was being hacked or in case there was a mole within the borough. It meant Elliot and I were able to be conjoined without any... (fuss) which was really nice."