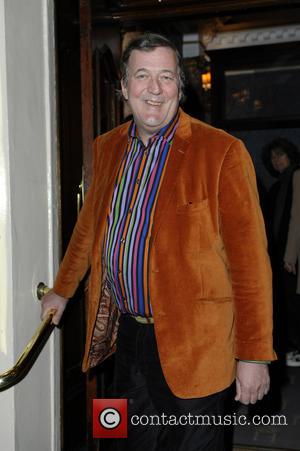 British actor Stephen Fry was due to be discharged from hospital on Monday morning (07Apr14) but his release was delayed due to a technical fault.

The funnyman has been under the care of doctors since last Wednesday (02Apr14), when he was admitted to a medical facility to treat painful skin condition cellulitis. He had hoped to be home by Friday (04Apr14), but he was kept in over the weekend (05-06Apr14), and his planned release on Monday was pushed back again after the machine needed to give him a magnetic resonance imaging (Mri) scan broke down.

He wrote on Twitter.com on Monday morning, "Oh woe, woe and woe with frilly pants on. The Mri machine is broken. Due for a scan and then release from hospital at 9 (Am). Heigh ho. Fate... Really looks like I'll be free by mid-afternoon. Mri at 1pm. Meanwhile now enchanted by (book) Good For Nothing."

Fry previously sparked further fears for his health over the weekend when he wrote in a post on Twitter, "Calamity. Tragedy. Woe. Catastrophe. End of Days. Beastly Dark Blues have blighted my happiness. I may never leave hospital at all now. Sob."