Today the world mourns the loss of one of the greatest physicists who ever lived. Stephen Hawking passed away at the age of 76 this week, and while all will be deeply saddened, his greatest achievement was indeed living more than fifty years beyond his life expectancy with ALS. Stephen Hawking at the Pride of Britain Awards

Famous for his trailblazing theories on black holes, the cosmologist and Cambridge alumnus died peacefully in the early hours of today (March 14th 2018) following a long battle with amyotrophic lateral sclerosis or motor neurone disease. His family confirmed the news in a statement.

By Holly Williams in Lifestyle / Showbiz on 24 March 2017

Scientist Stephen Hawking auditions celebrities to lend their voice to his machine for hilarious sketch.

If there's one thing we love about Stephen Hawking, it's his hilarious sense of humour. As part of Red Nose Day celebrations, he did a sketch where he decided to get various celebrities to audition to be his new voice; after having the same robotic vocal for 30 years, he fancied something a bit different.

For Comic Relief, the world's favourite theoretical physicist Stephen Hawking decided that the machine that he uses to help him talk needed a bit of an upgrade. He's had the same mechanical American voice since the technology surfaced, and while he has always felt sentimentally attached to it and therefore unwilling to change to a more advanced system, this sketch sees him look over a series of audition tapes from various stars who want to lend their voice to him.

Stephen Hawking To Play Glastonbury. Yep. We Said It.

Dr Stephen Hawking will play the Kidz Field at this year's Glastonbury Festival, joining entertainers including the magician Dynamo and New Zealand singer Mr Yipadee (and his pal Wonky Donky). Dr Stephen Hawking will play the Kidz Field at Glastonbury

It's unclear what Hawking will actually be doing in the Kidz Field, though he's unlikely to be giving a full reading of A Brief History of Time.

The world-famous physicist was confirmed by Glastonbury as a guest star at the kids area, alongside TV magician Dynamo and many more.

Glastonbury is famous for very many things – stone circles, crusty hippies and loud music – but almost certainly not for science. However, a reputation for serious thought might start developing with the news that Stephen Hawking is to make an appearance at this year’s festival.

Glasto’s official Twitter account confirmed that the world-renowned professor, whose life was recently the subject of the Oscar-winning movie The Theory of Everything, will be appearing at the Kidz Field. He’ll be part of the 21st anniversary celebrations of the creation of that area of the festival, which is aimed at children aged 12 or under.

Stephen Hawking will make an appearance at Glastonbury

One Direction have been writing songs for an upcoming fifth album, and Payne was describing them to Capital FM.

Barely a month after the departure of Zayn Malik, One Direction are clearly wasting no time in getting on with their career. Group member Liam Payne has suggested that the songs for their new album sound “great” and a bit like Oasis.

Payne was speaking to Capital FM on Tuesday morning and said “the album's coming together really well actually. The boys we've been writing with have come up with some great, great songs that are kind of like a bit Oasis-y almost, which is ace. I love that.” And Now...Stephen Hawking On Why Zayn Is Still In One Direction

Dr Stephen Hawking, one of the finest minds in the history of the mankind, has had his say on Zayn Malik's departure from pop group One Direction. Appearing via hologram at the Sydney Opera House over the weekend, Dr Hawking responded to a question about the "cosmological effect" of Malik leaving the biggest group on the planet. "Finally, a question about something important," he joked, before reassuring those devastated by the singer's unexpected departure.

Continue reading: And Now...Stephen Hawking On Why Zayn Is Still In One Direction

If you got the chance to ask Stephen Hawking about anything, surely Zayn Malik would top the list?

We all know Stephen Hawking is a genius who can give us answers on some of the universe’s most mind-boggling questions. So what better person is there to ask about the most troubling and puzzling question of recent times, what is the cosmological effect of Zayn leaving One Direction?

Stephen Hawking may have just given million of One Directioners hope.

Professor Hawking was speaking at the Sydney Opera House on Saturday night via a 3D hologram projection from his actual location at Cambridge University in the U.K. During the talk Hawking answered questions from his daughter, journalist Lucy Hawking and physicist Paul Davies, as well as audience members at the Opera house.

Continue reading: So What Does Stephen Hawking Think About Zayn Malik Leaving One Direction? 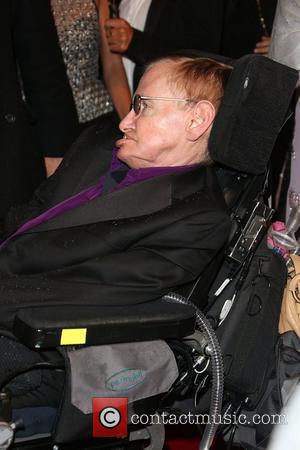 Discover the Extraordinary Life of Stephen Hawking in 'Hawking'