Review of 'Graffiti On The Train' Album by Stereophonics

It's been four years since Stereophonics released their limp seventh album 'Keep Calm And Carry On' and the interim period has seen former Noisettes drummer Jamie Morrison replace Javier Weyler.  He'll be performing on an imminent tour of smaller venues before larger shows later in the year are separated by a summer of festivals - they've been announced for V and T In The Park thus far. 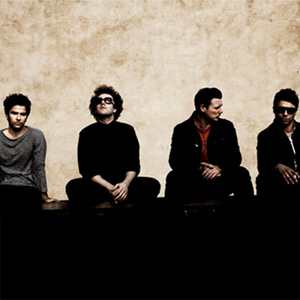 The lack of direction that characterised the last release has certainly been addressed by Kelly Jones for album eight - and those who favour the lazy 'meat and potatoes' tag for the band will have to find a new phrase.  Whilst this is not a 'Kid A'-style reinvention, this is easily the darkest record the band has produced and terrace anthems are at a premium.  'We Share The Same Sun' has a big chorus and 'Indian Summer' is radio-friendly, but the former finds Jones in analytical mood while the string-laden latter forgoes the riffs usually associated with the 'Phonics.  Orchestral sounds feature more prominently than most would anticipate, no more so than on 'Violins And Tambourines'; a brooding number with a cinematic feel that may seem tough-going but has a rewarding crescendo.  The ponderous 'Roll The Dice' is enjoyably big band, while the aggressive all-out rock of 'Catacomb' sits nicely at the centre of the album.

A turn at blues on 'Been Caught Cheating' utilises Jones' strong vocal style well, a quality also evident on 'No-one's Perfect'; a melancholic ballad that is brutally honest and revealing.  He has also produced one of the best narrative songs in the shape of the title track since the band's debut.  Only with 'Take Me' does the experimentation fail dramatically, a dark duet with an unnamed female vocalist ambles over a haunting piano line but never hooks attention.  The majority of 'Graffiti On The Train' does though and the lack of commercial aspiration is an important stride for the band's evolution.