Review of Keep Calm And Carry On Album by Stereophonics

Review of Stereophonics album Keep Calm And Carry On. 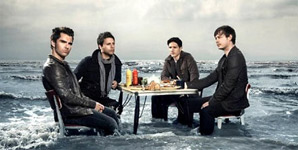 With five consecutive chart-topping albums and a hits collection approaching sales of a million units, even the most ardent Stereophonics detractor would find it difficult to argue Kelly Jones' band don't deserve some praise. Previewed last month at a Cardiff Castle gig, this is their seventh studio release and will be promoted with a UK arena tour in March.

Jones states in the press release that "we needed to up the bar a bit" and seemingly the first step to this was to employ the production talents of Jim Abbiss, known for his collaborations with Kasabian and Arctic Monkeys. In truth the effects of this are quite minimal, as 'KC&CO' is still very much a Stereophonics-sounding record but with half-steps in other styles. Take the breezy rock of opener 'She's Alright', which has some fantastic guitar lines and Jones' trademark raspy vocals, but fails to hit the excitement that the escalating vocals reach. 'Innocent' features a nostalgic romanticism that is currently receiving airplay, while 'Beerbottle' sees the band go all reggae for a slow-burning tale from Jones' youth that becomes increasingly charming with repeated listens. Speaking of lyrics, Jones was once hailed as one of the best songwriters of his generation, but you wouldn't think it with some of the lines from 'Trouble' and 'I Got Your Number'. Thankfully both are rather enjoyable, the former in a high-octane punk style and the latter a lovely slice of sleazy glam-rock.

Success means Jones no longer occupies the village life that inspired so many of the band's early catalogue and as such his subjects have moved on character narrations to social commentaries or his own feelings. 'Could You Be The One?' is as emotive and simple as the title suggests it should be, while 'Uppercut' is a mid-tempo anthem of being fed up with the modern world. '100MPH' builds on this, questioning how to cope with society and whether we're missing out on the simple things in life. It shows Jones can still pen an affecting set of lyrics, but those looking for something more rousing are likely to appreciate 'Live'n'Love', a dynamic classic rock tune, and the strutting bluesy funk of 'Stuck In A Rut'. The album concludes with 'Show Me How', a piano ballad that finds Jones in his most vulnerable position to date and looking for guidance. The final bars are truly hair-raising, going all gospel before settling gently, and shows that Stereophonics are still seeing where their music can go. This collection doesn't revitalise the band in the way that 'Dakota' hinted may happen, but it certainly refreshes their catalogue. It continues their run of good solid records, but now it remains to be seen if they can once again create another great album.