Review of Stereophonics live at Manchester MEN Arena on Wednesday December 10, 2008 with support from The Courteeners. 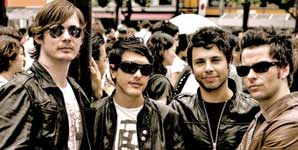 Touring the UK arenas for the second time in as many years, the quartet that make up Stereophonics are celebrating and promoting the release of Decade In The Sun, the best of package that spans their career to date. Supporting are local boys The Courteeners, who broke through in early 2008 with their debut record, 'St. Jude'.

Taking to the stage in front of a sizeable crowd, frontman Liam Fray initially comes across as a far cry from the outspoken young man regularly quoted in the music press. As his band tear through the set in a workman-like manner, he gains in confidence, telling those who attended their Manchester Apollo gig that they have "impeccable taste" and dedicating songs to those who get the Magic Bus from nearby Fallowfield. He has a similar mixture of charm and wit as Noel Gallagher and in 'That Kiss' has a song that is so affecting that is it up there with some of the Manchester legend's work. Finishing their impressive night's work, Fray thanks those who are in attendance and seems genuinely taken by the reaction they receive.

A huge curtain with Stereophonics' logo blocks off view of the stage as tongue-in-cheek boxing-style entrance announcement bellows over the PA system, informing of chart statistics that add to the celebratory atmosphere. When the cloth drops it reveals the band who launch into a crunching 'Vegas Two Times' before going to the front end of their catalogue and allowing the crowd to bounce around to 'More Life In A Tramp's Vest'. Kelly Jones and his men are regular a regular touring act of these shores, so they pull out the stops in order for this set of shows to stand out from their previous. With more screens that electrical giants Dixons and lights that outnumber those in your city's Christmas decorations, there is a great visual show to accompany the perfect renditions of the likes of 'Superman', 'Hurry Up And Wait' and an epic 'I Stopped To Fill My Car Up'. Jones' voice is as strong as ever, particularly during a section in which a string section is utilised to great affect on 'Since I Told You It's Over' and a well-received 'Handbags And Gladrags', both of which are songs that haven't featured in the band's set for many years. Also met with loud, crowd-pleasing reactions are 'Same Size Feet' and a raucous 'Last Of The Big Time Drinkers'.

The final onslaught of songs are well chosen, displaying both the diversity of Stereophonics and saving some of their most popular tracks to send the adoring audience home on a high. 'Local Boy In The Photograph' is a bona-fide anthem that has withstood a decade to sound as great as ever, while 'The Bartender And The Thief' is still the band's heaviest moment. Recent release 'You're My Star' is reworked into a beautiful acoustic tribute to Jones' young family and the sing-along that accompanies 'Traffic' shows the fans have taken it very much as a song of their own. Then of course we have 'Dakota', the sole number 1 in the catalogue and still with the ability to put a smile on your face. Everyone claps, everyone sings and the smile on the band's faces are still clear when the confetti canons shower those assembled as the song comes to a climax. For an act that has long been hailed for being prolific and professional, Stereophonics have now added an impressive visual aspect to help celebrate their career thus far.