Though their recent 'Keep Calm And Carry On' album failed to hit the top ten, Stereophonics' live popularity is seemingly intact as they play their seventh UK arena tour. Their summer schedule includes festival appearances at T In The Park, Oxegen and V, as well as being the first band to play the new stadium in Cardiff. 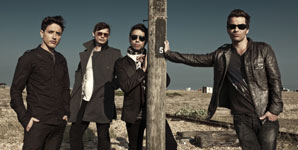 Whilst their performance quality has rarely been doubtable, the last five years have seen Stereophonics' shows become somewhat predictable. Before playing a note there is already an air of change - gone is the uniform black apparel and sunglasses - and this is cemented by 'Innocent' opening the show in buoyant mood. Tracks from first album 'Word Gets Around' such as 'A Thousand Trees' are celebrated wildly, but the early highlight is a rare outing of 'Goldfish Bowl' which serves to remind what an impressive debut the band produced. It's also an indication that the band are prepared to dip into parts of their catalogue that may not be expected and this is cemented later when Kelly Jones performs an acoustic rendition of the album number 'Caravan Holiday'.

An impressive number of new tracks are effortlessly slotted in the running order, with 'Uppercut' proving an anthem-in-waiting and the punk energy of 'Trouble' being well received. Indeed, many of the new tracks prove superior on stage to their studio counterpart, mainly as they retain the focus on Kelly Jones' powerful vocals but the guitars and drums turned up for a rawer feel. The old classics continue to delight, with 'Maybe Tomorrow' being greeted like an old friend having been returned to its full form after many years as an acoustic solo piece, and 'Just Looking' still sounding as good as when it was released over a decade ago. Three of the closing section are arguably the band's biggest songs - 'Local Boy In The Photograph', 'The Bartender And The Thief' and 'Dakota' - and they allow for a frenetic finale. Even the biggest critics of Stereophonics would have to admit to their quality and the flawless show is a reminder from the band that they continue to go perform strongly.