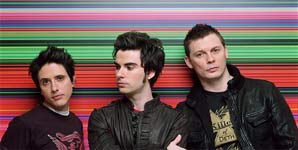 With their sixth studio album, "Pull The Pin", due for release in Autumn, Stereophonics have hit the road to test out their new material at slightly more intimate UK venues than they usually perform at. A full-scale arena tour is expected to take place in November.

Opening tonight are four lads from Sheffield who write songs about everyday life with catchy melodies. no, not the Arctic Monkeys, but Little Man Tate, who could easily be dismissed as jumping on the bandwagon of their fellow city dwellers. However, that would be lazy and though there are similarities between the groups, LMT are worth taking note of. Tracks such as "What? What You Got", "Little Big Man" and "House Party At Boothys" have the audience dancing, clapping and by their final choruses singing along. They obviously win over the crowd, but there's a near-tragic twist when a speaker falls from the frame above the stage, landing not too far from guitarist Maz. All's well that ends well though and no doubt this quintet could soon be playing venues of this size as headliners.

Presumably to help perform the new material, Stereophonics are joined by SpiderSimpson front man Adam Zindani on guitar and backing vocals. The band pick up where they left off on their last arena tour with a set consisting of singles and crowd favourites. "Superman" begins a performance that is extremely professional and clearly enjoyed by the band, who constantly smile and laugh at one another. The floor strains during the bouncing to "The Bartender And The Thief", while "Devil" is better received than expected. At larger shows in the past, crowds have let it bypass them, tonight it causes a crush at the barrier, as predictable does "Local Boy In The Photograph".

Five songs from the new album are performed, the first of which is soon-to-be-released download single, "Bank Holiday Monday". Rocky and hectic, Kelly Jones spits out lyrics at such a pace they are indecipherable, not that it matters to the audience who greet it with a huge cheer. "My Friends" doesn't have the same immediate impact, but "Pass The Buck" is as heavy as anything they've done and "Stone" is an epic slow-burner. Written about the London bombings, "It Means Nothing" is a tender track similar to previous hit "Rewind", with Jones at his lyrical best with words that hit home after just one listen. Though a stand-out 'pop' moment isn't displayed, the quintet of songs is fairly promising for the upcoming release. The band round off the night with "Dakota", the track that gave them their first number one and that guarantees every pair of hands is clapping along. It caps an enjoyable night for the fans and an immaculate performance from the group, who leave their fans highly anticipating their new record.