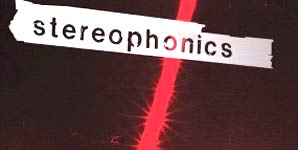 What do Hanson, Aqua, Olive and White Town all have in common? - They scored chart-topping singles in 1997. It was also the year that Stereophonics scored their first hit, though at the slightly less impressive position of 33. A decade later they're still going strong, with a sixth album due out later this year, while the other groups mentioned have folded or dropped into obscurity.

A package split into two discs, the first is a feature length documentary tracking the band from their early days of bad band names (Tragic Love Company) and laugh-out-loud terrible hair. More in-depth than your average band study, there are interviews with family members that matter (not just twice-removed cousins) and also their peers/friends, such as Paul Weller, Bono and a comedic Tom Jones. The band themselves, including former drummer Stuart Cable, also give their views. Detailing their career up to their last arena tour, it provides insight into their characters, from which you learn that Kelly Jones is career-driven nearly to a fault and this is perhaps what led to Cable's departure.

The second disc focuses purely on live performances from the band, mixing key headline shows (Cardiff Castle, Morfa Stadium) with festival appearances and arena tours. There's also a never-before-seen film following Jones' acoustic preview tour for third album 'Just Enough Education to Perform', which turns out to be a real treat for fans with the appearance of Noel Gallagher and Gem Archer of Oasis. Their rendition of 'Live Forever' is a wish-I-was-there moment, but is now available for all to share, as is Gallagher's accompanying wit.

While music DVDs will rarely entice new fans, Stereophonics have released a set which offers incredible value for money, rather than being a quick money-spinner - and yet there's still more to mention! So as to not just focus on the past, there is a very brief preview of new material which will no doubt excite fans and for a brief time it is available in a striking tin box. What more could a 'phonics fan want?!