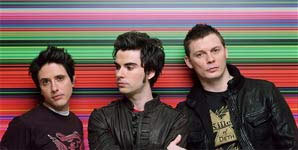 Fresh off of their fifth consecutive chart-topping studio album, 'Pull The Pin', Welsh-Argentine combo Stereophonics have invited their fans to appear as extras for the filming of the video to their next single. Fans have travelled from as far as Newcastle, Wales and even Belgium, so the band decides to reward that commitment with a live show.

The shooting for the promo overruns, meaning the band have to strip down the intended set. Joined by SpiderSimpson frontman Adam Zindani for guitar duties, they launch into a raucous 'Bank Holiday Monday', sending the couple of hundred present bouncing around the underground car park and even on the cars. A brutal 'Soldiers Make Good Targets' follows, while 'Pass The Buck' proves that the new material has been taken to heart by Stereophonics' followers who chant it back at full volume.

Despite the unusual venue, energy and enthusiasm from both band and audience is impressive, and the bar is raised when older favourites are unleashed. 'Superman' allows Zindani to show his own vocal skills, with a falsetto blending well with Kelly Jones' rougher tone, while 'The Bartender & The Thief' puts the suspension on the prop vehicles to maximum strain. 'More Life In A Tramp's Vest' and 'Local Boy In The Photograph' continue to thrill despite having been around for a decade, and a jam between the quartet evolves into a storming cover of The Rolling Stones' 'Gimme Shelter'.

The choice of 'A Thousand Trees' to end the set goes down well with more ardent fans and all bodes well for Stereophonics' arena tour which takes place throughout November. For those here who have spent their Friday night in a car park, it is unlikely to be something they forget about any time soon.