Stereophonics Rocker Kelly Jones Is Expecting A Child With His Wife Jakki Healy. 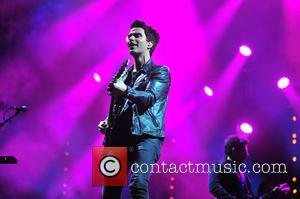 The Welsh singer, 41, confirmed the happy news to Britain's The Sun newspaper, saying, "Lots to celebrate recently - number one album, Welsh sport, and best of all we are thrilled to be expecting our first child."

The pregnancy news comes just weeks after the band scored a huge hit with their latest album, Keep the Village Alive, which debuted at number one in the U.K. charts following its release last month (Sep15).

Kelly met MTV worker Jakki in 2008 and they married in Ireland in 2013 in front of guests including Rolling Stones veteran Ronnie Wood, Paul Weller and actor Rhys Ifans.

He has two daughters, Lolita and Misty, from his previous relationship with Becka Walters.