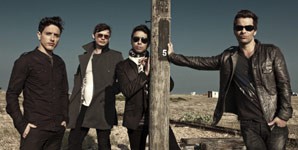 Interview with Kelly Jones from Stereophonics.

After celebrating ten years of success with a compilation CD and tour, Stereophonics are back within a year with a new album. Keep Calm and Carry On, the seventh studio album from the band offers something slightly different. We talk to Kelly Jones about the new album, showing who they really are, and new challenges.

Your new album has a different slant on the typical Stereophonics sound.
Well yeah. I think every record we've made has had something different on it. When we compiled Decade in the Sun this was quite obvious as the records were put back to back. When you make a new album you always try and do something different, and push the band in different places. I think on this record we were very excited about how people had received Decade in the Sun. It gave a whole new lease of life really to try different things for different people. It's a really different approach to the things we've done before but ultimately we just wanted to make a record that had a set of strong songs, and dress them up in a different way.

You have been quoted as saying 'We needed to up the bar a bit'.. Why? And how does the new album do this?
Just in the sense that we were with V2 records for ten years. We were the first signing by Richard Branson on that label, and we were the main act. Nobody really got bigger than us on that label, but then it was sold and Mercury looked after us.

Now Mercury has got Metallica, The Killers, Kanye West, all sorts of people. So when you get put on a label like this it makes you feel good. We were never complacent, but it sort of gives you a silent kick up the arse knowing that you've got to compete with all these bigger acts as well now. I found it more exciting than daunting that we were on a label with a lot of bands that are doing really successful things. I've never had that experience before.

Did you see it as a challenge?
Every album is a challenge. This is our seventh album and if you don't push yourself and make new records then people just get bored. We've been selling out arenas for nine years now so you have to keep doing new things to get people to your shows. When Dakota came out, fourteen year old kids thought that was our first record, but actually it was on our fifth album. I think as long as you keep changing, and keep the band excited too, then people watching the band will follow suit.

It doesn't get any easier then.
It gets easier in the sense of experience. Writing songs is quite effortless, but not in a way that it's easy. I've been writing songs since I was fourteen. It's what I do, its what I've always done. It's all about challenging yourself, and of course challenges in the studio will always be difficult at times, but as a band we quite like that procedure.

What has been your main inspiration for this album?
It's hard to say really because all albums are written over a period of ten or eleven months. Even while you're touring the album previously made. For me it's always writing about what I'm going through, what I know, things I see. Musically it can be completely different from one day to the next. I think it's just a case of finding something different for the band.

When I spoke to you last year I asked you what the best advice you have ever been given was. your answer. a poster saying keep calm and carry on. Is this behind the title?
Well, yeah. I think the poster was knocking around a bit, and in a subliminal way it was becoming quite relative to the songs on the record. All of the songs are about situations that come out the other end in a very uplifting and positive way.

I think that poster is a really good morale poster. Obviously it was originally going to be used by Churchill if Germany invaded. It was never used but it seems to have reared its head again recently. I didn't think we'd ever get away with using it to be honest, but we have. It's also quite apt to where the country is at the minute. It's just one of the titles that we threw into the hat and it's kind of stuck.

Along with the sound of the new album, you seem to have been much more open and honest about yourselves as a band this time year?
Yeah, we've never really had a photo of us on an album cover before. Decade in the Sun was the first one. I think a lot of people had misconceptions about the band anyway, and who we are as people. Everyone that works with us, our friends and our families, they all know what type of people we are.

I think from about the time of the third album where we did the Mr Writer thing, and people started coming in two's to interview us and saying 'ah you f****ing hate journalists. So before you start you're sort of protecting yourself and putting your walls up. It took a while for people to accept that all of these things people thought we were, we actually weren't.

When we did the Decade in the Sun promotion we went on all of the TV shows and showed everyone the type of people we are. We sort of thought, well this is who we are, do we just accept that people are being a bit frosty to us. maybe it's best just to show who we are anyway.

So do you think it's hard for bands at the moment then? You have had a lot of success over the past ten years, at the moment we are not seeing that longevity.
I think if you want it, you can keep on doing it... A lot of bands are lazy people. The hardest part is being with each other, but genuinely we are all mates and have been for a long time. We go out socialising with each other if we're not working anyway. So that makes the record making and the touring procedure pretty easy. I think a lot of bands struggle with that, and then the differences come in while they are in the studio, then they don't want to go on tour together. They then take three years off and it's harder to come back.

Obviously the market changes, it's more pop orientated at the minute than it was two years ago. But then it will be bands again, it goes full circle. I don't really get caught up in all that. Nobody else does what Stereophonics do, and if we keep doing new things and making new records then there's a place for us in the market and we're always going to be relative.

That said, there are some quite contrasting tracks on the new album, even a little bit of a pop sound. Is that not to keep up with current markets?
I think it's because I wanted to use new producers because I've worked with the same one for a while. He's my best mate but we realised we couldn't really teach each other any new tricks. So we started using some new producers, and one of those people was a guy called Jim Abiss. He's done The Noisettes, and Adele, but he's also done Arctic Monkeys, Kasabian, and Bjork. So he's got a good song eye, but also one for a good drum beat. I met him and said I don't want to do a big guitar album with a band in a room. I want someone who can mix it up a little, somebody to take us out of our comfort zone a little bit.

I was directing it with him and we had a good time doing it. So if some of the songs come across a bit less rock, then that was a good thing for me. We've shown people we can do that, I want to show them we can do other things too. Just like we've shown we can do country music and soul music, we can do other stuff as well.

What made Innocent the first single release then?
We previewed it at the Isle of White festival and people really liked it. It was up on You Tube and the kids seemed to like it. It was a strong contender from a radio point of view.

We've been on a couple of TV shows with 'Trouble' and 'Could You Be The One'. It's difficult to pick your first single, but I think this was just one of those songs that would work on a radio front. It's done really well actually.

I think it will definitely be a live hit too..
Yeah it's gone down well live, it's got a good drum beat. It's uplifting

So, it's onto the tour next year..
We tour Europe in January, the UK in March, and then we do Australia, Japan, and America.

2010 is a busy year for Stereophonics then?
Yeah, until about September

Is it hard being away that long?
Well, we do a few weeks and then come back for a few days. We used to do nine week runs but it just drives everybody crazy so you have to break it up a bit more.

We try to go to different countries, last time we did Singapore, Hong Kong, and places like that for the first time. This time we'll do South America.

Our band has never been with a major label, we've always been independent. So what we've achieved is f***ing miraculous anyway. We've always been a sort of underdog of funding, advertising, and marketing. We've never had what the big bands have had on the big labels. For us we've never taken it for granted, and tried to have a good time doing it.

You certainly seem to have done. Good luck with it all.

Thank you very much. Take it easy.

Keep Calm and Carry On is released on November 16th