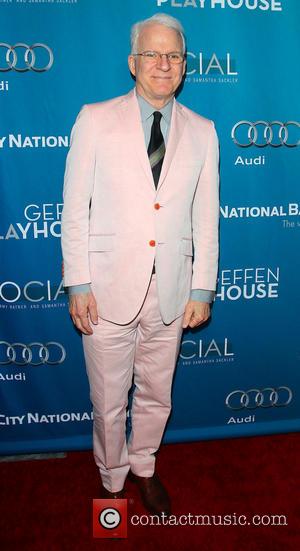 Williams was found dead in his home in Marin County, California. He was 63. Reports suggest he committed suicide

Martin took to Twitter.com on Monday afternoon, shortly after the sad news broke and wrote, "I could not be more stunned by the loss of Robin Williams, mensch, great talent, acting partner, genuine soul."

David Steinberg, Williams' manager for 35 years, said in a statement: "Nobody made the world laugh like Robin Williams. My brother, my friend, my soul mate, I will miss you."

Cher added, "Oh Robin... He was Sweet Lovely,Man. He ran high voltage,Mind Always Going, It was who he was.I Know Well..Many X's from High There is Only Low.So Sad", while Williams' Mrs. Doubtfire co-star Mara Wilson writes, "Very sad, very upset, very glad I did not have to hear about this though Twitter. Probably going to be taking some time off it for a while."

Miley Cyrus never met Williams, but admits the news of his death hit her hard: "I can't take the Robin Williams news. I've never cried over someone I've never met but I can't stop." And Lindsay Lohan adds, "Mr. Williams visited me the first day of filming The Parent Trap. I will never forget his kindness. What an enormous loss. My condolences."

His former co-stars Henry Winkler and Minnie Driver were also among the first celebrities to pay tribute to Williams. Happy Days star Winkler wrote, "To watch him create on the spot was a privilege to behold... Robin you are an angel now !!! Rest In Peace", while his Good Will Hunting castmate Driver added, "My Heart's broken. Robin was a beautiful, kind soul. Can't bear that he's gone. So incredibly sorry for his family."

One of the late funnyman's final co-stars, Joel MCHale, states, "Rip @robinwilliams. You were one of the very best that ever was. You were one of my heroes." And Williams' Mork & Mindy co-star Pam Dawber, who recently reteamed with Williams in U.S. Tv comedy The Crazy Ones, has revealed she's "devastated" by the sad news of her longtime friend's death. The actor's The Crazy Ones co-star Sarah Michelle Gellar simply posted nine photos of herself with Williams on Twitter.com.

Other thoughtful words came from Glee stars Chord Overstreet and Lea Michele, who wrote, "So heartbreaking to hear the terribly sad news about the amazing Robin Williams, thank you for bringing so much laughter and joy to us all", and Kevin Spacey, who added, "Robin Williams made the world laugh & think. I will remember & honor that. A great man, artist and friend. I will miss him beyond measure."

U.S. President Barack Obama also acknowledged the entertainer's impact to people all over the world in a statement which reads: "Robin Williams was an airman, a doctor, a genie, a nanny, a president, a professor, a bangarang Peter Pan and everything in between.

"But he was one of a kind. He arrived in our lives as an alien - but he ended up touching every element of the human spirit. He made us laugh. He made us cry. He gave his immeasurable talent freely and generously to those who needed it most - from our troops stationed abroad to the marginalised on our own streets.

"The Obama family offers our condolences to Robin's family, his friends, and everyone who found their voice and their verse thanks to Robin Williams."

Meanwhile, a tribute has been posted on a billboard outside Los Angeles' Laugh Factory, where Williams often performed. It reads: "Robin Williams. Rest in Peace. Make God laugh."