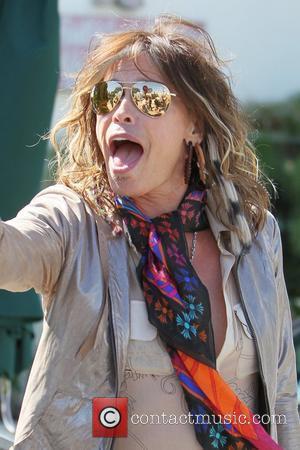 Picture: Steven Tyler laughing at a photographer who ran into a street sign while trying to take his picture, after leaving Urth Caffe with friends Los...

Rocker Steven Tyler has taken aim at DR. Drew Pinsky and his U.S. reality show Celebrity Rehab, insisting the "ghoulish and unreal" series exploited his pal STEVEN ADLER's weaknesses.
The former Guns N' Roses drummer was kicked out of the band in 1989 amid rumours his drug use was hampering his performance, and he has long struggled with his addictions.
He was ordered into rehab in 2009 following a 2008 felony drug charge, and his battle to get clean was chronicled on Celebrity Rehab with Dr. Drew and its spin-off series Sober House.
But Tyler has accused TV bosses of giving Adler cash to "act out his own messed-up state" while he was a patient at a California facility where the show was filmed.
In his new book, Does The Noise In My Head Bother You, Tyler writes, "They wanted him to act out his own messed-up state when he entered rehab. It was ghoulish and unreal. They gave him 30 grand for the episode, he snorted it all, crashed his car, and he ended up in jail detox."
And Tyler has also questioned the programme's credibility, adding: "It didn't seem to me all that ethical using actual f**ked-up people like Steven Adler in a reality show, but who am I to say?
"Not to mention getting trashed celebrities to mime their own self-destructive nosedives which they then sensationalise on a melo-f**king-dramatic reality show, which so traumatises them they end up in worse shape than ever - from the drugs they bought with the money from the show."
Adler is set to join Celebrity Rehab With Dr. Drew for another season later this year (11), alongside stars including Michael Lohan and Jeremy Jackson. The rocker has told fans he wants to ensure he keeps up his recovery and stays "on the right track".