Singer Stevie Nicks Is Battling A Number Of Painful Injuries While On Tour With Fleetwood Mac. 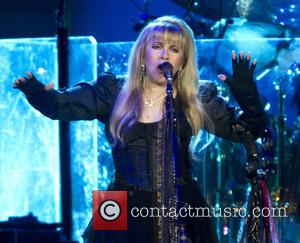 Nicks is currently spearheading the band's On With The Show tour, which is set to hit the U.K. on 8 June (15) when they play the Genting Arena in Birmingham, England. The iconic band is also due to headline Britain's Isle of Wight Festival on 14 June (15).

The Arizona-born singer has now revealed she has developed a bone spur - tiny bumps that grow on bone joints - in her toe from wearing "ballerina platform shoes on stage every night". In 2013, she suffered a fall and badly hurt her left knee, and she recently aggravated the old injury while performing on stage.

She says, "I have a bone spur in my toe from wearing my ballerina platform shoes on stage every night. And I had a fall in 2013 where I really hurt my left knee. Somehow a couple of weeks ago I reinjured it. I think I stepped down a little too hard on it on stage."

Despite her injury woes, Nicks has said that she will refuse surgery and just buy new shoes instead.

She adds, "I have to find new boots. Steel-toe capped boots that do not touch the toe. If anything is lying on that bone spur it's going to make it bigger and I'm going to have surgery. And I am not having somebody cut my toe open. There's just no way!"