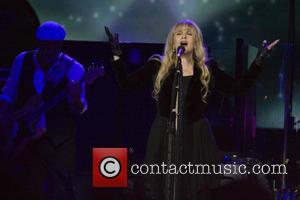 Rocker Stevie Nicks insists the door is always open for her former Fleetwood Mac pal Christine Mcvie to rejoin the band after the British singer expressed her hopes of a permanent reunion.

MCVie quit the band in 1998 and embraced a quiet life out of the spotlight, but she returned to the stage with the Dreams hitmakers for a pair of shows in London in September (13).

She enjoyed the get-together so much, she recently admitted she would love to return to the group full-time, saying, "I like being with the band, the whole idea of playing music with them. I miss them all. If they were to ask me (to rejoin) I would probably be very delighted... but it hasn't happened so we'll have to wait and see."

However, Nicks claims all MCVie has to do to make her wish come true is pick up the phone and tell them she is back, if she is serious about taking on the demands of touring once more at the age of 70.

She tells Billboard.com, "If Chris wants to come back to the band, I said to her, 'It's your band. I don't really think you have to ask. Because it's your band. MCVie. Fleetwood Mac-vie? So, it all depends, Chris, on you. How you feel. Do you want to take this on again?'"

Nicks, 65, admits performing live each night is a "job of champions" because, "(It) is not easy, 'cause we are not young. And we are out there rocking for almost three solid hours."

The singer isn't sure how committed MCVie is to the idea of rejoining Fleetwood Mac, but she is just as eager as the group's fans to find out: "I don't know what she'll do. Story to come. To be continued."