'Our plan's to shake up the world' said Ian Brown in response to the first question that was fired his way at this most eagerly awaited of press conferences in London's Soho on Tuesday afternoon. And to be quite honest, you couldn't help but believe him. 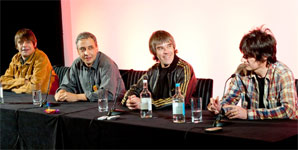 But if Ian Brown was in typical world beating swaggering form, then song writing partner and guitarist John Squire was also conforming to type, sticking to his shy and retiring persona and avoiding eye contact with those who posed questions at him like it was 1989 all over again. However, it was when asked to explain his past dismissive comments regarding a Roses reunion that Squire was at his most intriguing and informative, stating 'everything changed when me and Ian started seeing each other again, it was surreal, we went from crying and laughing about the old days to writing songs in a heartbeat'. This was the real eyebrow raiser, the news that this is not just some big one-off gig cash-cow. Ian Brown only reinforced the notion of an organic reformation by rubbishing claims that money was the main motivator and catalyst behind its coming about. He was quite adamant that the band had received several lucrative offers over the years, stating 'the moneys always been on the table, we could have taken it at anytime'. It's quotes like this that add weight to this being a reunion of proper artistic intentions, making it difficult for anyone to view its happening through cynical eyes.

As a full line up in front of the music press for the first time since that gloomy bow-out in '96, they thrived on the attention, making the room roar with laughter on several occasions and appearing to be revelling in the spotlight. At times it was more stand up than anything else with drummer Reni refusing to answer many, if any, questions seriously.

But have the four of them still got it as performers? That was a question posed to the band more than once, and one that Brown was always quick and defiant in answering: 'If we didn't think we had it in us, we wouldn't be sat here, there's no one in the world that can play like these three together' Once again Brown had the room believing in his band in one quick sound bite, while Reni was in a far more self-deprecating mood; 'I always said I wouldn't do it before 90' he said, sporting a '90 today' badge and stating 'as drummers you should really quit at 35'. It was that kind of press conference.

And there they were.Manchester's musical royalty, a group that had, along with the Smiths, always sworn never to reform, swaggering up to four microphones as if they'd never been away, making fifteen years look like a fifteen minute cigarette break and telling the nations press that they're not only back, but back sounding better than ever.

'We will ride it until the wheels fall off, like we did last time' said Ian Brown. Well this time, let's hope the wheels stay well and truly on.