Stone Sour Star To Be A Dad

Stone Sour rocker Roy Mayorga is to become a first-time dad next month (Sep11).
Frontman Corey Taylor let the baby news slip during a chat with a radio station in the band's home town, Des Moines, Iowa, revealing the drummer's wife Cazzie is almost eight months pregnant.
Taylor said, "Their due date is the day we are scheduled to play (in) Rio (at the Rock in Rio festival), so we're praying that it comes early. And it's a girl, so they're notorious for coming early. So we'll see what happens."
It's great news for the Mayorga family after a rough start to 2011 - the drummer suffered a stroke following a gig in Des Moines. 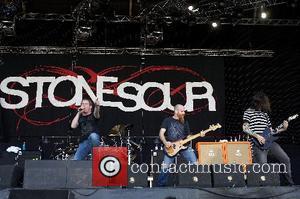 Stone Sour Star To Be A Dad