Review of Cheese Album by Stromae

A Belgian rapper who decides to produce his entire debut album in French, and to then go on and call it 'Cheese', is going to be up against some scepticism! Eurovision anybody?! 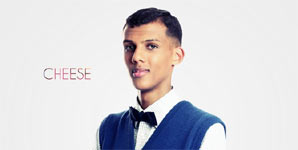 Having said this, 'Alors On Danse', meaning 'so we dance', has gained him a European number 1, perhaps because it is quite topical in its meaning. The aim is to uplift listeners by encouraging them to dance through the bad times. It has been a hit all over and remixed countless times by house DJs and rappers such as Kanye West. With a definite hook and the right amount of house influence, the simple fact is that you can see why it was a hit across 11 countries.

You don't need to speak French to get the music. With lyrics like 'ma dose, ma weed, ma coke, mon speed, mon crak, ma musique', I don't think you have to be fluent in French to work out what he is talking about (the track relates to music as his drug if you want to know the context of this). In fact, 'Rail De Musique' is a clever concept if you look into it, but even on the outside it's a catchy.

Not every track works, there are parts where it becomes a bit dull and serious. 'Cheese' will provide producers and DJs with some new material to mix, so I am in no doubt we will be hearing versions of Stromae around. Electronic house style beats, add a few synths and a euro pop vibe, it's simple but effective.

It's far from the Eurovision cheese you would expect from the slightly geeky looking album cover and tacky title. It's actually quite a sophisticated collection, with more of an intriguing pull than actual love for it.