Daphne (Emily Beecham) comes across as a fun-loving individual in her early thirties, who enjoys spending her evenings getting so drunk that she ends up having numerous one night stands with people she never bothers to learn the names of and getting kicked out of bars for disorderly behaviour. But in the daytime, she feels a little lost. She has a difficult relationship with her concerned mother, who she loves deeply despite their differences, and doesn't particularly enjoy her job serving at a restaurant.

She really doesn't know where she's going in her life, and she certainly doesn't believe she could enjoy a long-term relationship with a person. That is, until she bumps into David (Nathaniel Martello-White) at the supermarket - the bouncer who kicked her out of the club a few nights previously. As unlikely as it seems, he's very interested in dating her, despite her attempts at giving him the cold shoulder. Change is needed for her to start living again, and she seeks guidance in the form of a therapist named Adam to help her through it. After all, part of moving forward in one's life involves recognising your inner fears about the tragedy that could follow any happiness you achieve.

'Daphne' is a comedy drama directed by Peter Mackie Burns in his feature-length directorial debut with a screenplay written by Nico Mensinga ('Titus'). It won Best Performance in a British Feature Film at the Edinburgh International Film Festival and is set to be released in UK cinemas on September 29th 2017. 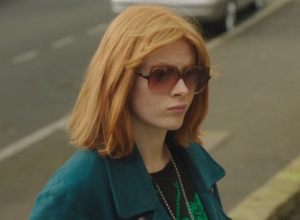 Daphne (Emily Beecham) comes across as a fun-loving individual in her early thirties, who enjoys...