A Judge In Los Angeles Has Denied A Request To Reduce Embattled Rap Mogul Suge Knight's Bail, Insisting His Lawyer Hasn't Come Up With Any Evidence To Compel Him To Slash The $10 Million (Gbp6.7 Million) Amount. 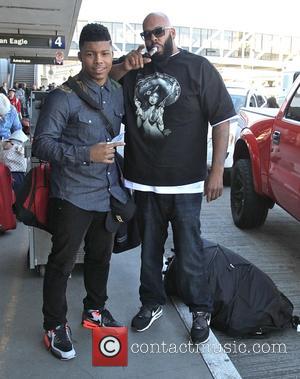 Superior Court Judge Ronald Coen made the ruling on Friday (17Jul15) after reviewing a new video of a fatal hit-and-run incident that Knight's defence attorneys insist proves their client was fleeing with his life from armed attackers when he ran over and killed a man and injured another following an altercation on a film set in Compton.

The judge told the rapper's lawyer Thomas Mesereau, "There's nothing new in the video."

Coen also refused to accept the lawyer's argument that that prosecutors had presented an unfair picture of Knight's criminal past, insisting he was never a gang member and wasn't either "a flight risk" or "a danger to the community".

The judge said, "I've heard nothing that would convince me that bail is insufficient."

Knight has pleaded not guilty to murder, attempted murder and hit-and-run charges.

The judge also rejected a motion by Knight's legal team to allow a doctor to evaluate the 50-year-old in jail, insisting records showed the fallen rap boss was receiving excellent medical care behind bars.

Knight is scheduled to return to court on 17 September (15).