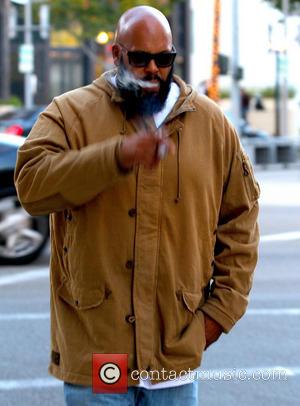 One strand to the Suge Knight legacy is, and always will be, accusations that he was connected to the murder of Tupac Shakur - something he has relentlessly denied. In his game-changing self-published book Murder Rap, the Los Angeles Police Department Detective Greg Kading - who worked on the Tupac murder case - detailed the serious failings of the LAPD to bring Shakur and Notorious BIG's killers to justice.

On the night of September 7, 1996, Shakur had attended the Mike Tyson versus Bruce Seldon boxing match at the MGM Grand in Las Vegas. After leaving, one of Knight's associates spotted Orlando Anderson - an alleged Crips gang member from Compton -in the lobby.

Shakur was told of the sighting and attacked Anderson, gaining revenge for the robbery of a member of the Death Row entourage in a Foot Locker store.

After the brawl, Shakur and Knight headed to the Death Row-owned Club 662. Riding in Knight's black BMW sedan, Tupac and his entourage were halted on Las Vegas Boulevard for not having license plates, though the party was released a few minutes later, without fine.

At 11.10pm, they were stopped at a red light near the Maxim Hotel. At 11.15pm, a white, four-door Cadillac pulled up on the sedan's right and rolled down a window. One occupant began shooting at Shakur - he was hit in the chest, pelvis, right hand and thigh. Knight was hit in the head by fragmentation, though a bullet also grazed him.

In a taped confession - of which Kading was reportedly privy to - South Side Crips member Keffe D placed himself in the passenger seat of the old white Cadillac that pulled up beside the BMW carrying Shakur and Knight toward the Las Vegas strip. Keffe D apparently told Kading that his nephew Orlando [Baby Lane] rolled down the window and "popped" Shakur, adding, "If they would've drove on my side [of the car] I would've popped him." According to evidence given to the LAPD, via Kading, the hit linked back to Knight and Sean Combs - though both rejected the claims.

Kading's investigation enjoyed a fresh breakthrough when the mother of Suge Knight's child accused the Death Row Records boss of handing her the money to pay for the murder of Biggie Smalls.

In Nick Broomfield's engaging documentary Biggie & Tupac, the documentarian makes one case that the Shakur hit was ordered by Knight because the executive owed the singer royalties and had heard his biggest star was planning to jump ship to another record label. The film observes that Knight had over thirty LAPD officers on his payroll for off-duty bodyguards and Broomfield proves that the police department did its utmost to avoid questioning the most obvious subjects.

Watch the trailer for Nick Broomfield's Biggie and Tupac:

According to the direction of Broomfield's movie, one theory is that both killings were ordered and paid for by Knight, and that the hit men were off-duty Los Angeles police officers. The filmmaker even visited Knight in prison, though his fearsome reputation meant Broomfield's photographer Joan Churchill refused to step foot inside the walls, meaning a freelancer had to be hired for the day.

Broomfield was filmed fearlessly walking up to mogul whilst he used the phone, "What interview!?" yelled the Death Row mogul, "Your message to the kids," came the clever response from the filmmaker, engaging Knight in conversation and setting him up for the Tupac questions - which he inevitably shirked.

When asked "Who killed Tupac?" in a BBC Radio interview in 2005, Broomfield said: "The big guy next to him in the car...Suge Knight." Suge Knight Was A Intimidating Figure In The Hip-Hop World