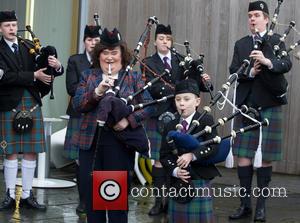 Picture: Susan Boyle - Susan Boyle has been made chieftain of the World Pipe Band Championships that take place in Glasgow late this year, 17-18th August...

An obsessive U.S. fan of Scottish singer Susan Boyle has bombarded 400 American radio stations with complaints that they do not play enough of the star's music. Grace Rooney has received just five replies to her angry messages, with two stations apparently promising to give the singer more airtime.